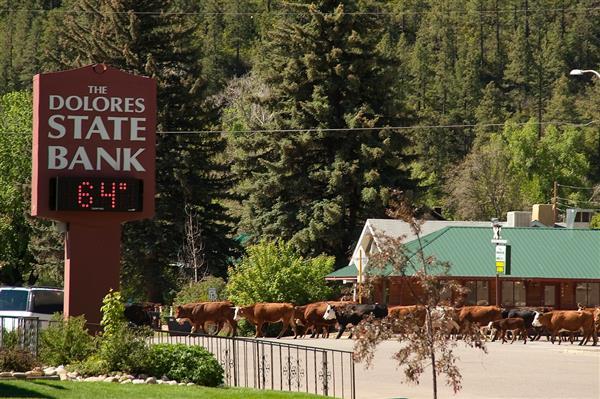 The Dolores River was named by two Spanish Catholic priests, Francisco Anastio Dominguez and Silvestre Valdez de Escalante, as they passed through the area in 1776. On their journey to find a route from the missions of Santa Fe, NM to California, they discovered the river and called it "Rio de Nuestra Senora de las Dolores" or the River of Our Lady of Sorrows. Although their purpose was never completed, their visits were the first to be recorded, and they opened up the area for settlement. The ancestral Puebloans were the original inhabitants of the area, living here until about A.D 1300. Historians are still trying to determine why they left the area, leaving behind a wealth of artifacts and remnants of their villages and kivas. They are believed to be the ancestors to the present-day Hopi Indians of Arizona and the Pueblo Indians of New Mexico.

The next to arrive were the Ute Indians whose migration routes took them through the Dolores River Valley and north, south east and west into northern Colorado, Utah, Arizona and New Mexico. Some of their descendants now live on the Ute Mountain Ute and Southern Ute reservations in Southwest Colorado and on the Uintah and Ouray Ute reservations in southeastern Utah. In 1859 the first Anglo expedition, headed by Newberry, a geologist, and J.N. Macomb, arrived here. According to the journal they published by Newberry, they came through the area on their way to the junction of the Grand (Colorado) and Green rivers.

The first cattlemen arrived with their livestock in 1876, and began settling the lower Dolores River Valley (now under the McPhee Reservoir). The Dolores River is the only river in the US to run first south then turn north and run 86 miles before emptying into the Colorado River near Moab, UT. The big bend of the river, about two miles west of present day Dolores, became the site of a small settlement called Big Bend in 1877.

In 1891 the railhead was established at the present site of the town of Dolores. The inhabitants of Big Bend moved everything lock, stock and barrel, to the new site at 6,982 feet elevation and named the town after the river that passed through it. 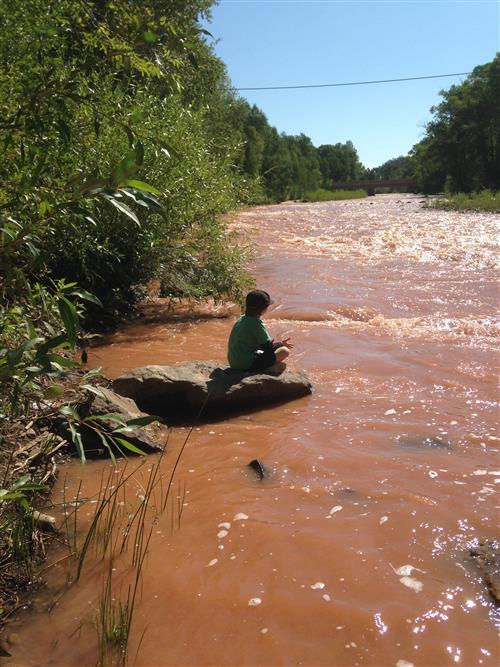 Railroad History
If the Rio Grande Southern Railway had ever been a money making endeavor with the changing economy of it's fledgling days, the Galloping Goose might never have been "hatched" to accommodate mountain travel. The RSG's early revenues came mainly from the silver and gold mines near Telluride, Ophir and Rico. But the repeal of the Sherman Silver Purchase Act caused the Silver Panic of 1893, and silver prices plummeted. As a result, many silver mines were closed, and the railroad slipped into it's first receivership that same year. Nevertheless, the railroad survived - just barely at times - for another 40 years hauling various commodities and passengers until the stock market crash in 1929 spelled the almost certain financial failure of the railroad. It was time to economize! But there remained an obligation and responsibility for the railroad to provide reliable transportation of small amounts of freight, passengers and the always important U.S. mail. There had to be a way! There was. That way was born as an idea that built what later became widely known as the Galloping Goose.

Galloping Goose
In June 1931, the first "motor" was built by master mechanic Jack Odenbaugh and his crew at the Ridgeway shops. Eventually there was a fleet ("gaggle") of seven in operation on the RGS with Motor No. 5 going into service on June 8, 1933. (The rail-road officially called these vehicles Motors until 1950.) The cost was $2,599 for No. 5, which was built with a 1928 Pierce-Arrow limousine body and running gear. It was rebuilt in 1946, using a World War II surplus GMC gasoline truck engine and a Wayne Corp. school bus body. In 1950 the freight/mail compartment was converted to carry 20 additional passengers for sightseeing trips. With a one man crew, and operating on gasoline rather than steam, our local Galloping Goose and its fellow goslings fit the bill for economic travel. Even though originally built from Buics and Pierce Arrows, the word "dignified" never seems to have been included in their description, but they were serviceable and definitely fit their purpose. Traveling through the countryside with a horn that could easily be mistaken for the call of a real goose, they were said to have "waddled" down the uneven, poorly maintained tracks of the cash-strapped Rio Grande Southern. 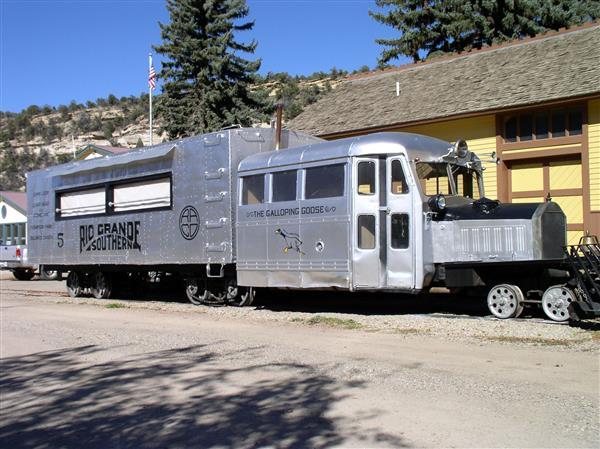 Throughout the Great Depression, World War II and all the way to abandonment in 1952, the RGS continued to operate steam engine powered trains as needed for hauling heavy freight and livestock shipments. But by mid-1933, the only choice for folks traveling through southwestern Colorado by rail was the not-so-spacious accommodations of a waddling, honking, Galloping Goose. Sometimes the ride included such entertainment as going over the top of Lizard Head Pass in a blinding blizzard or waiting somewhere along the line for flood waters to subside, but in most cases it was "the only way to fly." After WWII, the old muddy wagon trails slowly became more like highways, and trucks and passenger buses began to rob the railroad of business, in 1950, the federal government did not renew the U.S. mail contract with the RGS, and financially, that was the last straw. Tourist passenger traffic during the summers of 1950 and 1951 did not generate enough revenue to keep the failing railroad alive. In April 1952, the Interstate Commerce Commission gave permission to the receiver in Denver to abandon the entire railroad, and by March 1953 it was all gone. That is to say, the railroad line was gone but some of the equipment survives to this day, including Galloping Goose No. 5 nesting in Dolores.

In 1952, members of the Dolores Rotary Club purchased Galloping Goose No. 5 for $250. Then they put it on display in Flanders Park in Dolores as a reminder of the town's railroad heritage.